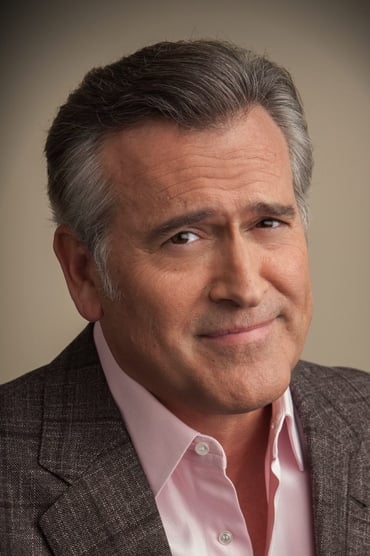 Bruce Lorne Campbell (born June 22, 1958) is an American actor, producer, writer and director. One of his best-known roles is portraying Ash Williams in Sam Raimi's Evil Dead franchise, beginning with the 1978 short film Within the Woods. He has starred in many low-budget cult films such as Crimewave, Maniac Cop, Sundown: The Vampire in Retreat, and Bubba Ho-Tep.

Oz the Great and Powerful

Cloudy with a Chance of Meatballs

Doctor Strange in the Multiverse of Madness

My Name Is Bruce

My Life as a Teenage Robot

Homicide: Life on the Street

Man with the Screaming Brain

The Dead Next Door

The Adventures of Brisco County, Jr.

Sundown: The Vampire in Retreat

Half in the Bag

Doc of the Dead

The Color of Time

Jack of All Trades

To Hell and Back: The Kane Hodder Story

The Last Kids on Earth

Thou Shalt Not Kill... Except

The Gore the Merrier: The Making of Evil Dead II

Medieval Times: The Making of Army of Darkness

The Evil Dead: Treasures from the Cutting Room Floor

The Last Kids on Earth: Happy Apocalypse to You

Ripley's Believe It or Not!

In the Line of Duty: Blaze of Glory

Touch the Top of the World

Sand Pirates of the Sahara

Hatred Of A Minute

Slashed Prices: The Making of Intruder

Hail to the Deadites

All Hail the Popcorn King!

The Ladies of the Evil Dead Meet Bruce Campbell