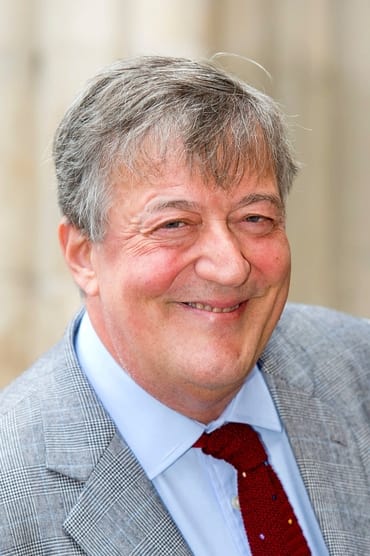 Stephen John Fry is an English actor, screenwriter, author, playwright, journalist, poet, comedian, television presenter and film director, and a director of Norwich City Football Club. He first came to attention in the 1981 Cambridge Footlights Revue presentation "The Cellar Tapes", which also included Hugh Laurie, Emma Thompson and Tony Slattery. With Hugh Laurie, as the comedy double act Fry and Laurie, he co-wrote and co-starred in A Bit of Fry & Laurie, and the duo also played the title roles in Jeeves and Wooster.

As a solo actor, Fry played the lead in the film Wilde, was Melchett in the BBC television series Blackadder, starred as the title character Peter Kingdom in the ITV series Kingdom, and is the host of the quiz show QI. He also presented a 2008 television series Stephen Fry in America, which saw him travelling across all 50 U.S. states in six episodes. Fry has a recurring guest role as Dr. Gordon Wyatt on the Fox crime series Bones.

Apart from his work in television, Fry has contributed columns and articles for newspapers and magazines, and has written four novels and two volumes of autobiography, Moab Is My Washpot and The Fry Chronicles. He also appears frequently on BBC Radio 4, starring in the comedy series Absolute Power, being a frequent guest on panel games such as Just a Minute, and acting as chairman for I'm Sorry I Haven't a Clue, where he was one of a trio of hosts who succeeded the late Humphrey Lyttelton. Fry is also known in the UK for his audiobook recordings, including as reader for all seven Harry Potter novels.

The Hobbit: The Battle of the Five Armies

The Hobbit: The Desolation of Smaug

The Hitchhiker's Guide to the Galaxy

The Man Who Knew Infinity

The Life and Death of Peter Sellers

The Con Is On

The Look of Love

A Bit of Fry and Laurie

Do I Sound Gay?

Dancing with the Birds

Have I Got News for You

Scotty and the Secret History of Hollywood

A Handful of Dust

The Discovery of Heaven

Whatever Happened to Harold Smith?

The Kate Bush Story: Running Up That Hill

Who Do You Think You Are?

March of the Dinosaurs

Tales of the Riverbank

The Killing$ of Tony Blair

Stephen Fry: Out There

The Bleak Old Shop of Stuff

Alan Davies: As Yet Untitled

Surrealissimo: The Trial of Salvador Dali

Chance in a Million

The Machine That Made Us

The Story of Light Entertainment

And the Winner Isn't

Churchill and the Movie Mogul

The Not So Secret Life of the Manic Depressive: 10 Years On

What's the Matter with Tony Slattery?

A Fanatic Heart: Geldof On Yeats

The Making of 'Gosford Park'

Inside 'The Hitchhiker's Guide to the Galaxy'

Russia's Open Book: Writing in the Age of Putin

Anything More Would Be Greedy

The Picture of Dorian Gray

Don't Crash: The Documentary of the Making of the Movie of the Book of the Radio Series of 'The Hitchhiker's Guide to the Galaxy'

A Profile of The Life and Death of Colonel Blimp

Night of the Living Dread

Sparkling: The Story Of Champagne

In Search of the Prisoner

Our Gay Wedding: The Musical

Jools Holland: My Life in Music

Spectacled Bears: Shadows of the Forest

A Profile of The Importance of Being Earnest

This Is David Lander

A Life On Screen: Stephen Fry

The Two Loves of Anthony Trollope

There's Nothing to Worry About!

Benjamin Sniddlegrass and The Cauldron of Penguins

Listening through the Lens: The Christopher Nupen Films